I. Free-Col- Conquer the New World! 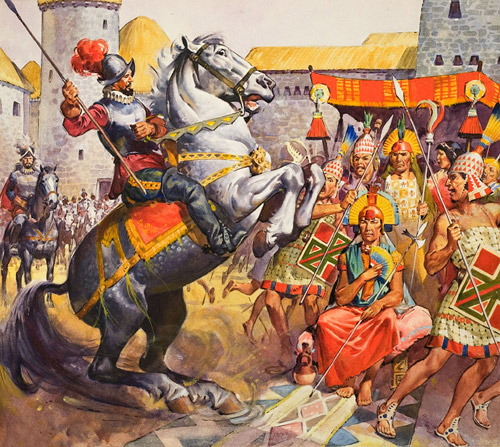 On Fridays we will have FreeCol Fridays. FreeCol is a strategy game which will challenge you to explore, build, and fight your way to the top as one of four european powers.

A Colonization game starts in 1492 and the objective is to colonize America. You begin the game with one vessel and two colonists.

As in Civilization you need to build a powerful nation, but fortunately in the early part of the game you'll be able to send ships back to Europe in order to sell the goods you've produced or to bring back some colonists. Getting colonists into the new world is a very important aspect of the game as one game turn takes one year and later on even one season and as a result colonies don't grow as rapidly as they do in Civilization. You can pay colonists to come to the new world or you can show off with the religious freedom of your people in which case they will hop on your vessels for no money at all.

Another important aspect is trade: the source of all income (apart from Inca and Aztec gold). In a land filled with precious resources it is important to build your colonies at the right location and to place craftsmen where they belong. This is not only to have an income but also to be able to live off the land when you can no longer count on the support of Europe.

Through all this you'll have to decide whether or not you want to live next to the native Americans peacefully. They can teach your colonists new skills that cannot be tought anywhere else and they will offer you goods in case you choose to treat them as your friends. On the other hand, their villages can be attacked and their valuable goods can be taken from them and sold in Europe.

Other European forces are also busy occupying their piece of the new world. Should their borders go too far then take over some of their colonies by force because they wouldn't hesitate to do the same thing to you.

The object of Colonization is to declare your independence and survive an attack of the King's forces. Before declaring your independence you need to have the majority of the people behind you. This can be done by promoting free speech and by providing a strong governmental system